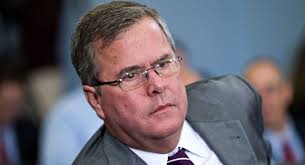 The Republican remained as Florida's governor until 2007. The following year, many speculated that he'd run for the U.S. Senate, but that did not occur. Bush announced in December 2014 that he was considering a 2016 presidential run.

Florida governor and politician Jeb Bush was born on February 11, 1953, in Midland, Texas. Son of the 41st president of the United States, George Bush, and brother of the 43rd president, George W. Bush, Jeb Bush has spent much of his life around politics. He showed an interest in public service at an early age, choosing to go to Mexico to teach English while on an exchange program in high school. Bush went to the University of Texas where he earned a degree in Latin American affairs.

Bush left Texas and moved to Florida in the early 1980s to work as a real estate developer and broker. In 1987 and 1988, he held his first government post, serving as Florida's secretary of commerce. Bush made his first run for public office as the Republican candidate for the state's governorship in 1994. He lost the election by a small margin to Governor Lawton Chiles. Bush, however, was victorious on his second try in 1998.

As governor, Bush found himself in the midst of the 2000 election controversy. The fate of the election rested on the results of Florida, which had some problems with its ballots. With his brother as one of the candidates, Bush declined to participate in any of the decisions related to the election to avoid the appearance of impropriety.

Two years later, Bush won his bid for re-election. Shortly before the election his daughter Noelle was arrested for drug possession. Earlier that year, she had been arrested for prescription drug fraud and sentenced to go into a drug rehabilitation program. Bush said that he loved his daughter unconditionally, but he did not want her to receive special treatment. She was sentenced to serve 10 days in jail. Noelle stood by her father's side when he was sworn in for his second term in January 2003.

In 2006, Florida law prohibited Bush from running for a third straight term. Leaving the governorship in 2007 after eight years in office, Bush will be remembered for his work on the state's education system, his efforts to protect the environment, and his achievements in improving the state's economy.

After leaving office in 2007, Bush remained active on a number of political issues. He has been an outspoken supporter of the Common Core Standards, a national educational initiative, and of immigration reform. In December 2014, Bush showed his interest in possibly returning to elected office.He posted on his Facebook page that he had "decided to actively explore the possibility of running for President of the United States."

While not an official candidate for the 2016 Republican presidential nomination, Bush has outlined some of his exploratory campaign plan. He will launch a political action committee in January 2015 and will publish an e-book on his political views in the spring. Bush will also release 250,000 emails from his time as governor, according to CNN.com.

If he succeeds, Bush will be the third member of his family to run for the nation's highest office. He is expected to face some challenges from other possible opponents, such as Chris Christie, the governor of New Jersey, and Marco Rubio, a senator from Florida and a longtime Bush supporter.

Bush and his wife, Columba, have been married since 1974 and have three children: George, Noelle, and John Ellis, Jr.—also called "Jeb."
Email ThisBlogThis!Share to TwitterShare to FacebookShare to Pinterest
Newer Post Older Post Home