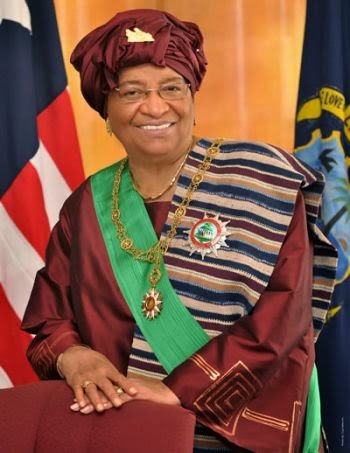 Born in Liberia in 1938, Ellen Johnson Sirleaf was schooled in the United States before serving in the government of her native Liberia. A military coup in 1980 sent her into exile, but she returned in 1985 to speak out against the military regime. She was forced to briefly leave the country again.
When she won the 2005 election, Johnson Sirleaf became the first female elected head of state in Africa. In 2011, she was one of a trio of women to win the Nobel Peace Prize.

Ellen Johnson Sirleaf was born on October 29, 1938, in Monrovia, Liberia. A graduate of the College of West Africa at Monrovia, she went on to receive her bachelor's degree in accounting from the Madison Business College in Madison, Wisconsin, a degree in economics from the University of Colorado at Boulder and a Master of Public Administration degree from Harvard University.

After returning to Liberia, Ellen Johnson Sirleaf served as assistant minister of Finance in President William Tolbert's administration. In 1980, Tolbert was overthrown and killed by army sergeant Samuel Doe, who represented the Krahn ethnic group. Johnson Sirleaf went into exile in Nairobi, Kenya, as well as in the United States, where she worked as an executive in the international banking community.

In 1985, Johnson Sirleaf returned to Liberia and ran for a seat in the Senate, but when she spoke out against Doe's military regime, she was sentenced to 10 years in prison. She served a partial sentence before moving to Washington, D.C. When she returned to her native country for a third time in 1997, it was as an economist, working for the World Bank and Citibank in Africa.

After supporting Charles Taylor's bloody rebellion against President Samuel Doe in 1990, Johnson Sirleaf ran unsuccessfully against Taylor in the 1997 presidential election. Taylor subsequently charged Johnson Sirleaf with treason. In 2005, after campaigning for the removal of President Taylor, Johnson Sirleaf took over as leader of the Unity Party. That year, promising economic development and an end to corruption and civil war, she was elected to the Liberian presidency. When she was inaugurated in 2006, Johnson Sirleaf, or the "Iron Lady," as she was also known, became the world's first elected black female president and Africa's first elected female head of state. 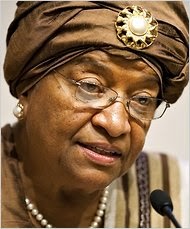 Despite Charles Taylor's large number of followers in Liberian government, including his son-in-law and estranged wife, President Johnson Sirleaf submitted an official request to Nigeria for Taylor's extradition in 2006. Five years later, she shared the 2011 Nobel Peace Prize with Leymah Gbowee and Tawakkol Karman, awarded "for their nonviolent struggle for the safety of women and for women’s rights to full participation in peace-building work."Ellen Johnson Sirleaf has four sons and six grandchildren, some of whom live in Atlanta, Georgia.