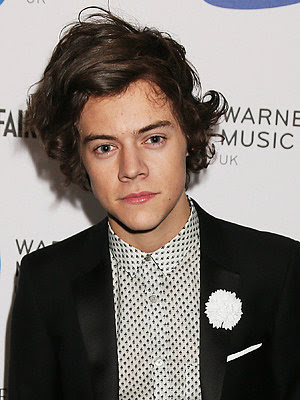 English-born singer and teen heartthrob Harry Styles is best known as one of the five members of boy band One Direction.

Harry Styles was born in Bromsgrove, Worcestershire, England, on February 1, 1994. He first sang in a band in a school competition, and in 2010 he performed on the television show The X Factor, where the judges combined him with four other young male singers to form One Direction. Despite finishing third in the contest, One Direction received a recording contract and became a best-selling boy band.

Harry Edward Styles was born on February 1, 1994, in Bromsgrove, Worcestershire, in the West Midlands region of England. His parents, Des and Anne, divorced when he was 7 years old. He and his sister Gemma were brought up by their mother in the town of Holmes Chapel in Cheshire. His mother was later remarried, to Robin Twist.

Styles attended Holmes Chapel Comprehensive School, where he and three of his friends formed a band called White Eskimo. Styles was White Eskimo's lead singer, and the band was popular enough to win a band competition at their school. After school and on weekends, Styles worked at the W. Mandeville bakery in Holmes Chapel.

In 2010, when he was 16 years old, Harry competed in the seventh season of the television show The X Factor, singing Stevie Wonder's "Isn't She Lovely" as his audition song and Oasis' "Stop Crying Your Heart Out" in a later round. He was cut before the finals, but in a surprise move, judges Nicole Scherzinger and Simon Cowell put him together with fellow competitors Niall Horan, Liam Payne, Louis Tomlinson and Zayn Malik to form a new group act for the remainder of the competition.
Performing as One Direction (a name reportedly suggested by Styles), the five boys became one of the most popular contenders in the X Factor finals that season. Although they finished the competition in third place, they were immediately signed to Cowell's Syco music label.

Styles is the youngest member of One Direction, and his curly hair, wide smile and sweet-yet-naughty demeanor have made him a fan favorite. He sang some of the lead vocals on the band's first single, "What Makes You Beautiful," which was released in September 2011 in the United Kingdom. One Direction's debut album, Up All Night, was a best seller in both the United Kingdom and the United States the following year. In another highlight of 2012, Styles and the rest of One Direction performed at the Olympics closing ceremony in London.

Styles is known as "the flirt" of One Direction, and his romantic relationships have been followed obsessively by the press and his fans. In 2011, he began dating television presenter Caroline Flack, whom he met when he was competing on The X Factor and she was hosting its companion show, The Xtra Factor. The difference in their ages—Styles was 17 at the time, and Flack was 32—was the subject of much discussion among Styles' fan base.

Since his breakup with Flack in January 2012, Styles has been romantically linked with photographer Sarah-Louise Colivet, models Emma Ostilly and Cara Delevingne, and singers Lily Halpern and Rita Ora. His most-publicized relationship of 2012 was a two-month liaison with pop star Taylor Swift. The two were frequently photographed together, and Swift reportedly referred to Styles in song lyrics and performances after they stopped dating.