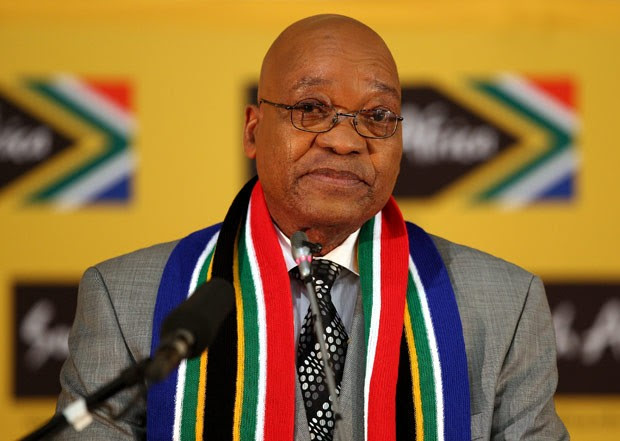 Jacob Zuma was elected president of South Africa in 2009. In 2007, he won the presidency of the African National Congress, the country's leading political party.

Born in Nkandla, South Africa, on April 12, 1942, Jacob Zuma was elected president of South Africa in 2009. In 2007, he won the presidency of the African National Congress, which he joined at an early age in 1959. Zuma served as deputy president of South Africa from 1999 to 2005. He is a controversial politician, involving himself in several legal scandals associated with corruption and racketeering. A polygamist, Zuma has 20 children.

Born on April 12, 1942, in Nkandla, South Africa, Jacob Gedleyihlekisa Zuma is a controversial figure in South-African politics. In late 2007, he was elected president of the African National Congress, the country's leading political party, defeating Thabo Mbeki. In 2009, Zuma was elected president of South Africa, defeating Kgalema Motlanthe, who currently serves as his deputy president.

The road to the ANC presidency started long ago for Zuma. He was born in a part of South Africa now known as KwaZulu Natal (once Zululand) and became politically active at a young age. Influenced by a trade unionist family member, Zuma joined the ANC, a political party that stood against the country’s practice of apartheid—or racial segregation—and other discriminatory policies in the late 1950s. Also around this time, the ANC and other opposition groups were banned by the government so Zuma had to keep his membership secret.

Forced to go underground, the ANC, which had long been a nonviolent group, developed a militant wing in the early 1960s. Known as Umkhonto we Sizwe, the new militant group undertook acts of sabotage against the government. Zuma joined the group in 1962 and was arrested the next year with 45 other members and soon was convicted of conspiracy. Sentenced to 10 years in prison, he served his time in the infamous Robben Island prison where Nelson Mandela, the country’s future president, was also imprisoned for many years.

After his release in 1973, Zuma continued working for the ANC and played an essential role in building the underground organization’s infrastructure in KwaZulu Natal. Two years later, he went into exile living in several different African nations. Zuma remained dedicated to the ANC and joined the organization’s National Executive Committee in 1977. Holding a number of ANC posts over the next decade, he established a reputation as loyal and hard working.

After the ban on the ANC was lifted in 1990, Zuma returned to South Africa. He helped the party negotiate with the existing government led by F. W. de Klerk about political prisoners and the return of exiles. In his native KwaZulu Natal, Zuma also worked to end the violence there. While he failed in his 1994 campaign to become premier of that province, Zuma is credited with establishing lasting peace in the region and became a member of the province's Executive Committee of Economic Affairs and Tourism that year. Within his own political party, he won the position of national chairperson of ANC as well as the party’s chairperson position for the KwaZulu Natal.

Continuing with his political ascent, Zuma was appointed executive deputy president of South Africa by Thabo Mbeki in 1999, after Mbeki won the presidency. As part of his vision for the country, Mbeki created a special unit—known informally as "the Scorpions"—to investigate corruption. Later that year, the South-African government announced that it had reached a deal to buy 29 million rand worth of strategic arms—planes, boats, helicopters and submarines. This deal has haunted Zuma for years. He and other members of the government were investigated when financial irregularities were discovered. Initially cleared in a 2001 report on the matter, Zuma ended up facing corruption charges, but those charges were dropped in 2003.

Zuma's legal woes resurfaced in 2005 after his financial advisor, Shabir Shaik, was convicted of corruption and fraud. Zuma was again charged with corruption for taking a bribe in connection with 1999 arms deal. As a result, he was fired by President Mbeki.

In December 2005, Zuma was charged with raping a woman in his home. Pleading not guilty, Zuma stood on trial in Johannesburg for several months in early 2006. During the trial, Zuma was criticized for his ignorance about the transmission of HIV/AIDS. His accuser was HIV positive and Zuma said that they had sex without protection and that he showered after having sex to avoid getting the virus. This was big news for a country has been battling a HIV/AIDS epidemic. After the judge ruled that the sex was consensual, Zuma was acquitted of the charge in May.

In the fall of 2006, the corruption charges against Zuma were thrown out by a judge. However, the door was left open for charges to be filed against him in the future. Free of legal challenges, Zuma was soon running for the presidency of the ANC. He took on former friend and president Mbeki for control of their political party. Mbeki has been viewed a moderate politician who had helped steadily grow the country’s economy, which is one of the strongest in Africa. But some see him as aloof and removed from the people.

In direct contrast, Jacob Zuma has positioned himself as a man of the people. He came from very humble beginnings and lost his police officer father when he was only 4 years old. To help his family after his father's death, Zuma did odd jobs to bring in money while his mother was employed as a domestic worker. With no time for school, he taught himself how to read and write. His triumph over his early struggles makes Zuma an appealing figure to many South Africans. He also capitalized his history as a guerilla fighter to show himself to be a man of action and has used the song, "Bring Me My Machine Gun," as his anthem.

When Zuma defeated Mbeki in December 2007, it was seen as a sign of impending change for South Africa. Strongly supported by the unions and some communist party officials, he is seen a likely move to the left from the centrist positions of Mbeki, according to a report from the Pretoria News. This has created some concern over the country's economic future.
In 2009, Zuma was elected president of South Africa, defeating Kgalema Motlanthe, who currently serves as his deputy president. As the leader of the ANC, Zuma is the party's prime candidate for the presidency in South Africa's 2014 elections. Zuma's re-election, however, could prove to be less than seamless due to mounting criticism that his administration has failed to improve the nation's economy or effectively battle corruption, as well as his less-than-perfect criminal record.
Email ThisBlogThis!Share to TwitterShare to FacebookShare to Pinterest
Newer Post Older Post Home