enry Seriake Dickson is the current governor of Delta statem he was born on 28th day of January, 1966 in Toru-Orua Town of Sagbama Local Government Area of Bayelsa State, Nigeria to the family of Mr. and Mrs. Nanaye Dickson of Orua and a descendant of the famous King Kpadia Royal House of Tarakiri Kingdom.

He attended Kolobiriowei Primary School, Toru-Orua from 1972 to 1978 where he got his First School Leaving Certificate and proceeded to Government Secondary School, Toru-Ebeni in 1978 to 1983 and obtained his West African School Certificate (WASC/GCE). 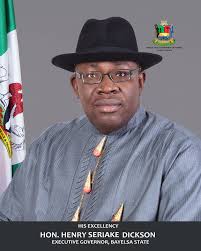 In 1988 He gained admission into Rivers State University of Science and Technology, Port Harcourt to read Law from where he graduated with LL.B (HONS) in 1992.

He then proceeded in 1993, to earn his Bachelors in Law (B.L HONS) from the Nigeria Law School, Lagos whereupon he was called to the Nigerian Bar the same year.

He became a Cadet Assistant Superintended of Police in 1994 but he voluntarily withdrew his service after close to a decade as a Police Officer to practice the profession of law.

He was elected to the National Assembly's House of Representatives in 2007. In April 2011, he was elected for a second term; this election was the first time that someone in his constituency has done this.

Dickson assumed his role as Governor of Bayelsa State on 14 February 2012. The Independent National Electoral Commission reported that Henry Dickson won over 90% of the votes.

Shortly after taking over gubernatorial duties, Dickson said that he was "painfully transiting to the executive arm of government." He went on to say that he might, in fact, return to the National Assembly someday.

He is happily married with children and holds the traditional title of OLOKODAU of ORUA.
Email ThisBlogThis!Share to TwitterShare to FacebookShare to Pinterest
Newer Post Older Post Home