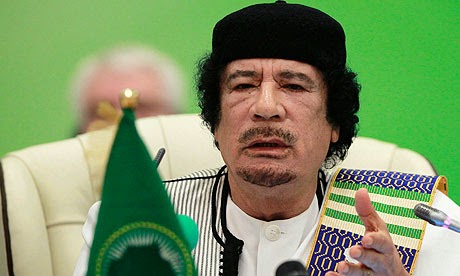 Muammar al-Qaddafi seized control of the Libyan government in 1969 and ruled as an authoritarian dictator for more than 40 years before he was overthrown in 2011.

Muammar al-Qaddafi was born in a Bedouin tent in Sirte, Libya, in 1942. He joined the military and staged a coup to seize control of Libya in 1969, ousting King Idris. Though his Arab nationalist rhetoric and socialist-style policies gained him support in the early days of his rule, his corruption, military interference in Africa, and record of horrific human rights abuses turned much of the Libyan population against him. Accused of supporting terrorism, in the last decade of his rule Qaddafi reached a rapprochement with Western leaders, and Libya became a key provider of oil to Europe. During the "Arab Spring" of 2011, NATO troops supported dissidents attempting to overthrow Qaddafi's government. After months on the run, on October 20, 2011, he was killed in his hometown of Sirte.

Qaddafi's ruling style was not just oppressive, it was eccentric. He had a cadre of female bodyguards in heels, considered himself the king of Africa, erected a tent to stay in when he traveled abroad, and dressed in strange costume-like outfits. His bizarre antics often distracted from his brutality, and  earned him the nickname "the mad dog of the Middle East."In addition to his destructive rule at home, Qaddafi was despised by much of the international community. His government was implicated in the financing of many anti-Western groups around the world, including some terror plots.

The Irish Republican Army allegedly had links to Qaddafi. Because of the regime's links to Irish terrorism, the United Kingdom cut off diplomatic relations with Libya for more than a decade. In 1986, Libyan terrorists were thought to be behind the bombing of a West Berlin dance club that killed three and injured scores of people. The U.S. in turn, under President Ronald Reagan's administration, bombed specific targets in Libya that included Qaddafi's residence in Tripoli.In the most famous instance of the country's connection to terrorism, Libya was implicated in the 1988 Lockerbie bombing. A plane carrying 259 people blew up near Lockerbie, Scotland, killing all on board, with falling debris killing 11 civilians on the ground. Libyan terrorists, including an in-law of Qaddafi's, were also believed to be behind the destruction of a French passenger jet in 1989, killing all 170 on board.

Rapprochement With the West

In 1990s, the relationship between Qaddafi and the West began to thaw. As Qaddafi faced a growing threat from Islamists who opposed his rule, he began to share information with the British and American intelligence services. In 1994, Nelson Mandela persuaded the Libyan leader to hand over the suspects from the Lockerbie bombing. It wasn't long before Qaddafi had mended relations with the West on many fronts.Qaddafi was welcomed in Western capitals, and Italian prime minister Silvio Berlusconi counted him among his close friends. Qaddafi's son and heir apparent, Seif al-Islam Qaddafi, mixed with London's high society for several years. Many critics of the newfound friendship of Qaddafi and the West believed it was based on business and access to oil. In 2001, the United Nations eased sanctions on Libya, and foreign oil companies worked out lucrative new contracts to operate in the country. The influx of money to Libya made Qaddafi, his family and his associates even wealthier. The disparity between the ruling family and the masses became ever more apparent.

After more than four decades in power, Qaddafi's downfall happened in less than a year. In January 2011, the Tunisian revolution forced out longtime dictator Zine al-Abidine Ben Ali and set off the Arab Spring. The next month, Egyptian ruler Hosni Mubarak was forced out, providing a morale boost to protesters in several Arab capitals. Despite the atmosphere of severe repression, demonstrations broke out in the city of Benghazi and spread throughout Libya.Qaddafi used aggressive force to try to suppress the protests, and the violence quickly escalated. Police and foreign mercenaries were brought in to shoot at protesters, and helicopters were sent to bombard citizens from the air. As casualties mounted, Libyans grew  more determined to see Qaddafi's ouster. As violence spread through the country, Qaddafi made several rambling speeches on state television, claiming the demonstrators were traitors, foreigners, al-Qaeda and drug addicts. He urged his supporters to continue the fight, and small groups of heavily armed loyalists battled against the rebels.By the end of February 2011, the opposition had gained control over much of the country, and the rebels formed a governing body called the National Transitional Council. The opposition surrounded Tripoli, where Qaddafi still had some support. Most of the international community expressed support for the NTC and called for the ouster of Qaddafi. At the end of March, a NATO coalition began to provide support for the rebel forces in the form of airstrikes and a no-fly zone. NATO's military intervention over the next six months proved to be decisive. In April, a NATO attack killed one of Qaddafi's sons. When Tripoli fell to rebel forces in late August, it was seen as a major victory for the opposition and a symbolic end for Qaddafi's rule.

In June 2011, the International Criminal Court issued warrants for the arrest of Qaddafi, his son Seif al-Islam, and his brother-in-law for crimes against humanity. In July, more than 30 countries recognized the NTC as the legitimate government of Libya. Qaddafi had lost control of Libya, but his whereabouts were still unknown.

On October 20, 2011, Libyan officials announced that Muammar al-Qaddafi had died near his hometown of Sirte, Libya. Early reports had conflicting accounts of his death, with some stating that he had been killed in a gun battle and others claiming that he had been targeted by a NATO aerial attack. Video circulated of Qaddafi's bloodied body being dragged around by fighters.For months, Qaddafi and his family had been at large, believed to be hiding in the western part of the country where they still had small pockets of support. As news of the former dictator's death spread, Libyans poured into the streets, celebrating the what many hailed as the culmination of their revolution.

Post Qaddafi, Libya has continued to be embroiled in violence. With state authority eventually being held by the General National Congress, various militia groups have vied for power. Dozens of political figures and activists in Benghazi have been killed, with many having to leave the area. The country has also seen a succession of interim prime ministers.
Email ThisBlogThis!Share to TwitterShare to FacebookShare to Pinterest
Newer Post Older Post Home