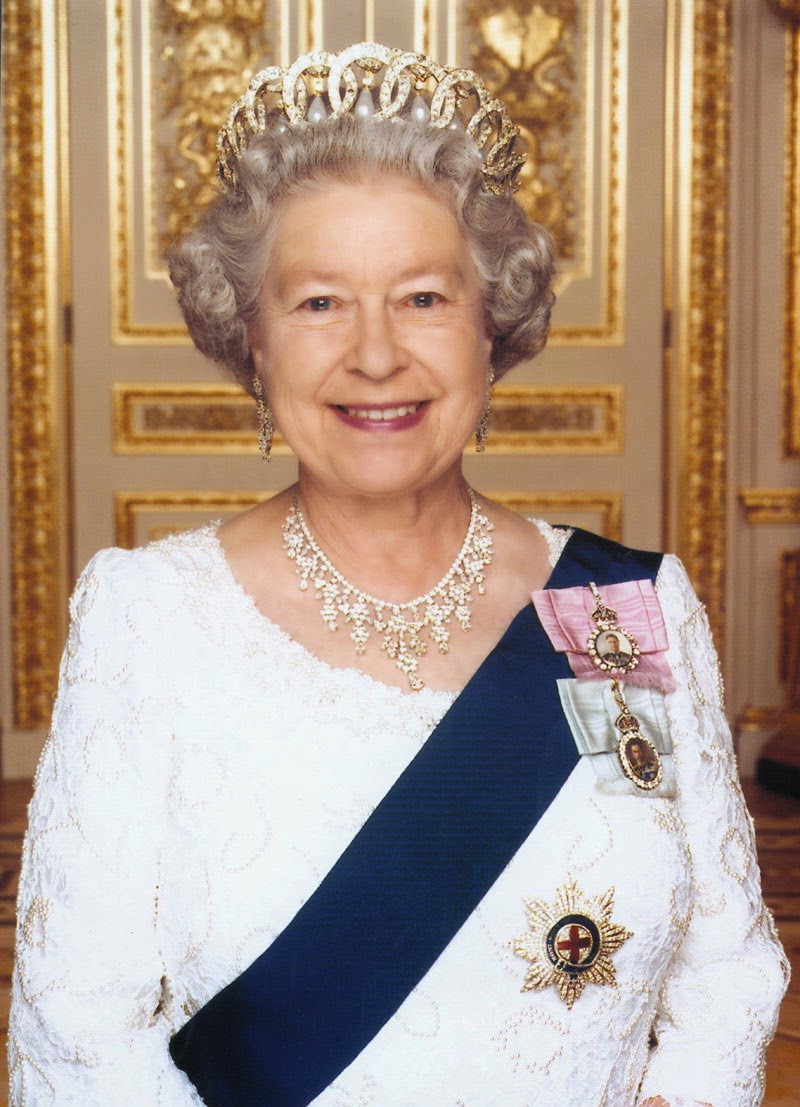 Queen Elizabeth II of Great Britain was crowned in 1953. Her 60 years on the throne was celebrated in June 2012, with the Diamond Jubilee.

Queen Elizabeth II was born Princess Elizabeth Alexandra Mary on April 21, 1926, in London, to Prince Albert, Duke of York (later King George VI), and Elizabeth Bowes-Lyon. She married Philip Mountbatten, Duke of Edinburgh in 1947, became queen on February 6, 1952, and was crowned on June 2, 1953. During her reign, she has tried to make the British monarchy more modern and sensitive to the public.

At the time of her birth, no one thought Elizabeth would someday become queen of Great Britain. Her father, Prince Albert, was the second son of King George V and Queen Mary. Elizabeth got to enjoy the first decade of her life with all the privileges of being a royal without the pressures of being the heir apparent. Her father and mother, also known as the Duke and Duchess of York, divided their time between a home in London and Royal Lodge, the family's home on the grounds of Windsor Great Park. Elizabeth and her younger sister Margaret were educated at home by tutors. Their studies included French, mathematics, history and geography. They also took dancing, singing and art lessons.In 1936, the course of Elizabeth's life changed with the death of her grandfather, King George V. Her uncle became King Edward VIII, but he only ruled for six months.

King Edward was in love with American divorcee Wallis Simpson, and had to choose between her and the crown. In the end, Edward chose Simpson and Elizabeth's father, Prince Albert, became King George VI.With the outbreak of World War II, Elizabeth and her sister largely stayed out of London, spending much of their time at Winsor Castle. From there, she made one of her famous broadcasts. Over the radio, Elizabeth sought to reassure children who had been evacuated from their homes and families. The 14-year-old princess, showing her calm and firm personality, told them that "in the end, all will be well for God will care for us and give us victory and peace.

"Elizabeth soon started taking up other public duties. Appointed Colonel-in-Chief of the Grenadier Guards by her father, Elizabeth made her first public appearance inspecting the troops in 1942. She also began to accompany her parents on official visits within Great Britain.In 1945, Elizabeth joined the Auxiliary Territorial Service to help in the war effort. She trained side-by-side with other British women to be an expert driver and mechanic. While her volunteer work only lasted a few months, it offered Elizabeth a glimpse into a different, non-royal world.

Elizabeth first met Philip Mountbatten, son of Prince Andrew of Greece, when she was only 13 and was smitten with him from the start. Distant cousins, the pair kept in touch over the years and eventually fell in love. Her father, King George VI, was hesitant about the match. Mountbatten had ties to both the Danish and Greek royal families, but he didn't possess great wealth and was a bit rough in his personality. They made an unusual pair. Elizabeth was quiet and reserved while Philip was boisterous and outspoken.At the time of their marriage in 1947, Great Britain was still recovering from the ravages of World War II. Elizabeth is said to have collected clothing coupons to get fabric for her gown. The ceremony was held at London's Westminster Abbey on November 20. The couple wasted no time in producing a heir. Son Charles was born the following year and daughter Anne arrived in 1950.On February 6, 1952, King George VI died, and Elizabeth assumed the responsibilities of the ruling monarch. She and Prince Philip had been in Kenya at the time of her father's death. Her official coronation took place in June 1953 in Westminster Abbey. And for the first time, the ceremony was broadcast on television, allowing people from across the globe witness the pomp and spectacle of the event.In her new role, Queen Elizabeth II had new political duties. She held weekly meetings with the country's prime minister, starting with Winston Churchill and every leader after him. As head of the Commonwealth, Elizabeth II traveled extensively. She also made visits to other countries as a representative of Britain, including a groundbreaking trip to Germany in 1965. Elizabeth became the first monarch to tour there since World War I.

Elizabeth had two more children—sons Andrew and Edward—in the early 1960s. She worked tirelessly to protect the image of the monarchy and to prepare for its future. In 1969, she officially made Prince Charles her successor by granting him the title of Prince of Wales. Approximately 200 million people tuned in to see the ceremony.To continue the rule of the Windsor family, Elizabeth pressured Prince Charles to marry. He finally decided to tie the knot in 1981. The wedding of Prince Charles to 19-year-old Diana Spencer drew enormous crowds in the streets of London and millions watched the proceedings on television. Public opinion of the monarchy was especially strong at that time.The following year, Elizabeth worried about her second son Andrew. Prince Andrew served as a helicopter pilot in the British Royal Navy during the Falklands War of 1982. Britain went to war with Argentina over the Falklands Islands, a clash that lasted for several weeks. While more than 250 British soldiers died in the conflict, Prince Andrew returned home safe and well much to his mother's relief.

Elizabeth, as queen, has seen the monarchy come under attack during her lifetime. The once-revered institution has weathered a number of storms, including death threats against the royal family. In 1979, Elizabeth suffered a great personal loss when Lord Mountbatten, her husband's uncle, died in a terrorist bombing. Mountbatten and several members of his family were aboard his boat on August 29, off the west coast of Ireland, when the vessel exploded. He and three others, including one of his grandsons, were killed. The IRA (Irish Republican Army), which opposed British rule in Northern Ireland, took responsibility for the attack in June 1981, Elizabeth herself had a dangerous encounter. She was riding in the Trooping the Colour, a special military parade to celebrate her official birthday, when a man in the crowd pointed a gun at her. He fired, but, fortunately, the gun was loaded with blanks. Other receiving a good scare, the queen was not hurt in the incident. She had an even closer call the following year when an intruder broke into Buckingham Palace and confronted Elizabeth in her bedroom. When the press got wind of the fact that Prince Philip was nowhere to seen during this incident, they speculated about the state of the royal marriage.

The love lives of her children have caused Elizabeth much heartache as well. The rocky marriage of Prince Charles and Princess Diana made headlines for years before the couple announced plans to divorce in 1992. Prince Andrew's union with Sarah Ferguson ended up in the tabloids as well, with photos of Sarah with another man ran in papers. Her own husband has caused numerous public relations headaches with his seemingly inconsiderate off-the-cuff comments and rumors of possible infidelities.

In 1997, Elizabeth went under intense media scrutiny herself in the wake of Princess Diana's death. Her incredibly popular daughter-in-law, sometimes nicknamed the People's Princess, died in a car crash in Paris on August 31. The queen was her estate Balmoral with Prince Charles and his two sons, Prince William and Prince Harry, at the time of the incident. For days, Elizabeth remained silent while the country mourned Diana's passing and she was sharply criticized for her lack of response. Stories circulated that the queen did not want to give Diana a public funeral, which only fueled public sentiment against her. Nearly a week after Diana's death, Elizabeth returned to London and issued a statement on the late princess.

After the start of the twenty-first century, Elizabeth experienced two great losses. She said good-bye to both her sister Margaret and her mother in 2002. Margaret died that February after suffering a stroke. Only a few weeks later, Elizabeth's mother, known as the Queen Mother, died at Royal Lodge on March 30 at the age of 101. Known to be a stickler for ceremony and tradition, Elizabeth has shown some signs of softening her stance. She had objected to the relationship between Prince Charles and Camilla Parker Bowles, especially because of the pair had been involved while the prince was married. When the pair married in 2005, Elizabeth and Prince Philip had a reception in their honor at Windsor Castle. Elizabeth has also emerged as a devoted grandmother to Prince William and Prince Harry. Prince William has said that she offered invaluable support and guidance as he and Catherine Middleton planned their 2011 wedding. That same year, Elizabeth showed that the crown still had symbolic and diplomatic power. She became the first monarch to visit the Republic of Ireland since it gained independence in the 1920s.

Elizabeth has modernized the monarchy as well. She had dropped some of its formalities and made some of sites and treasures more accessible to the public. As Britain and other nations have struggled financially in recent years, she has welcomed the elimination of the Civil List, which was a public funding system of the monarchy that dates back roughly 250 years. The royal family will continue to receive some government support, but the queen will have cut back on spending.

Despite the occasional call to step aside for Prince Charles, Elizabeth has remained steadfastly on the throne. Some of her duties have been passed on to her eldest son, but she still maintains a busy schedule of her own. Elizabeth handles roughly 430 engagement each year and supports more than 600 charitable organizations and programs.

Now in her eighties, she celebrated her Diamond Jubilee in 2013. The celebration marked her 60 years as queen. As part of the jubilee festivities, a special service was held at Westminister Abbey on June 2nd, the 60th anniversary of her coronation. Elizabeth was surrounded by family at this historic event, including her husband Prince Philip, son Prince Charles and her grandsons Prince Harry and Prince William. British prime minister David Cameron was also on hand. Elizabeth may even surpass Queen Victoria as Britain's longest ruling monarch who reigned for 63 years.

Elizabeth celebrated another happy event that July. Her grandson, Prince William, and his wife, Kate Middleton, welcomed their first child together, a son named George Alexander Louis—known officially as "His Royal Highness Prince George of Cambridge"—on July 22, 2013. Elizabeth visited her new great-grandson after William and Kate returned home to Kensington Palace from the hospital.

Not one for the spotlight, Elizabeth likes to spend her free time on quiet pastimes. She likes to read mysteries, work on crossword puzzles and even to watch wrestling on television.

For much of her life, Elizabeth has surrounded herself with dogs. She especially known for her love of corgis. Also a horse enthusiast, Elizabeth breeds thoroughbreds and attends several racing events each year.
Email ThisBlogThis!Share to TwitterShare to FacebookShare to Pinterest
Newer Post Older Post Home